Wow.  The weather this afternoon was, in a word, wild.  The same storm front that hit us around 4:00pm is moving into the Baltimore/DC area as I write this.  That’s faster than I could drive there (without serious risk of a seriously expensive speeding ticket, anyway).  We hadn’t checked the news, so our first warning of severe weather was a sharp crack of thunder and a sudden burst of wind thrashing the trees as the western sky darkened.  Then the rain hit—hard.  Less than a minute later, the hail came.  Carolyn had been napping, but the sound of the wind and hail woke her.  As I went up the stairs to her room, I glanced out our north windows and saw that the sky had shifted to a pale green.

As Kat soothed Carolyn, I went to shut the back door before it let even more rain into the house, and as I shut it the hail suddenly started coming down so hard that I couldn’t see the house behind ours.  The noise of the hail slamming into the back of the house, driven by winds more fierce than I’ve seen in quite some time, was almost deafening.  I shouted for Kat and we headed into the basement, just in case; it felt silly to be doing it when I was pretty sure there was no real danger, but millenia-old instincts to hunker down and protect the family took over.  Ten minutes later, the storm had abated, but the hail was left thick on the ground.  On the back walk, rainwater carved channels through the hailstones, and the flower beds in the front were coated in ice pellets, each one slightly bigger than a BB pellet. 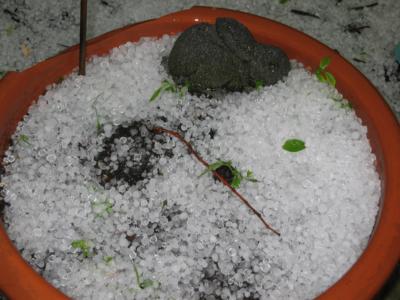 Even after the winds had calmed and the hail stopped, we had rain and frequent, furious lightning.  The rain came down so hard and fast that our street became a minor river, as I’m sure happened to every other street in our area.  Chilly mist wafted off of the hail on the ground as the ice sublimated, making the world seem a little more dreamlike and uncertain.  Across the street, a small group of befuddled gulls[1] sat on a neighbor’s lawn, running away from the spray when a car drove past, the same way I’ve seen gulls run away from waves on an ocean shore.  To end up on our street, they’d been blown several miles from their starting point, most likely the mouth of the Cuyhoga River in downtown Cleveland.

We’re expected to get more strong thunderstorms overnight, thanks to the same system that’s pushing into the Chicago area right now.  Hopefully they won’t be so violent as to necessitate another trip to the basement.

[1] No, it was not a flock of seagulls.  There weren’t enough of them to make a proper flock, if you ask me, and there’s no such thing as seagulls.  They’re gulls, period.