Children charged through our house, laughing and shrieking and calling to each other as their games shifted fluidly from one imaginative burst to another.  In the dining room, their adults sat around the table and talked, benignly ignoring the chaos around them.  Earlier, there had been a group photo of the kids and rides in a crazily-painted convertible.

I sat in the kitchen window seat, my feet braced against the middle frame, staring out into the back yard.  The afternoon was chilly and bright but not sunny, as befits March in Cleveland, but I didn’t really see it.  I only know what the weather was like because I’ve gone back to look at the photos of that day.  Whatever light was entering my eyes and falling on my retinas wasn’t leaving any impression in my brain; I was focused somewhere unseeable, trying not to think about the unthinkable.

A hand on my arm snapped me back.  Rebecca stood next to me, her expression clouded and frowning.

She climbed wordlessly into my lap and curled up against my chest, her back to the window.  She rested a cheek in a cupped palm that pressed on my sternum, looking unseeingly into the kitchen, still pensive.  The chaos was downstairs in the play room now, distant and muted.  I circled my arms around her curled frame, gently pressing her to me, listening to and feeling her breath draw in and out.

I knew she was upset, and I knew just as certainly that she wanted to talk about it.  I was far less certain that I wanted to hear it, but this wasn’t about me.  It never had been, and it was far less so now.

“What are you thinking, sweetie?” I asked after a few moments.

“I’m scared that my brain cancer won’t go away and I will get dead,” she quavered miserably.

Suddenly I was hugging her tightly, my face half-buried in the bright blue shmata she wore on her head, tears coursing from my eyes.

We wept quietly together, curled up on the window seat.

I had been crying a lot at that point.  Three nights before, after all the kids had gone to sleep, I had stumbled into Kat’s and my bedroom, collapsed on the bed, and sobbed without stopping for more than an hour.  At some points, I wept so intensely that Kat tried to get me to take medication to calm myself, afraid that I was about to literally choke to death on my own sorrow.  Part of me wanted that to happen.

Because earlier that day, we had been told that another tumor had emerged.  As soon as the doctors walked into the room, we knew from their body language that the news wasn’t good.  When they asked Rebecca if she would go play with the Child Life specialist while Mommy and Daddy talked to the doctors, we knew it was bad.  I felt the blood drain from my face as I reached out to take Kat’s hand in mine, both of us staring at the lead doctor and still trying to hope that it wasn’t as bad as we feared.

The previous August, the doctors in Philadelphia had told us the tumor was essentially completely removed, and that a long course of radiation and chemotherapy could, possibly, prevent a recurrence of the cancer that had almost killed our daughter.  They didn’t give odds.  They didn’t have too many assurances to give us, save one.  They could pretty well assure us that if the cancer came back, all we could do was watch Rebecca die.

Now it was March 20th, almost exactly seven months from the day she had first seized.  We had gotten her through multiple surgeries, two months of treatments in a city far from her home, and then weekly chemotherapy back home.  Holidays had come, her MRIs had been clear, we’d returned to a relative normalcy.  The nightmare had engulfed us, then receded.

Now it engulfed us again, more complete than ever.  For those seven months, I had held my fears in abeyance.  Now there was no dam to hold them back.

I lay in my bed, almost screaming my sorrow, choking and nearly convulsing, as I tried to cope with the certainty that our little girl was going to die soon, and there was no hope left.  Although she would ultimately prove me wrong, because of course she would, I tried to come to terms with my desolate conviction that Rebecca wouldn’t even graduate kindergarten, let alone turn six.

That night, I started to mourn my child’s death.

Within a minute or two, Rebecca was done crying and starting to get restless to rejoin the chaos.  I paused my own grief, wiped the tears from both our faces, and gave her kisses.  She smiled at me and climbed off my lap.

Five minutes later, she charged through the kitchen with her friends, the kids she’d shared a playgroup with since they were newborns, shrieking and laughing along with them, because to be five years old is to live completely in the moment.

They thundered onward, down the steps to the back hall and up the stairs to the sun room and on to the living room.  I listened to her bright, sunny voice echoing from across the house, drew in a deep breath, wiped away my tears, and resolved to live in the moment as much as I could.  For her, and for me.

That night, after the kids were asleep, Kat and I stood in the kitchen, cleaning and putting away the last few dishes left over from the play date.  We talked about the day, how much fun all the kids had had, and shared our mutual admiration of our friends, who had brought their children to play with our child, knowing how that would sharpen their kids’ pain when Rebecca’s death came.

“Thank you for letting me fill the house with people,” Kat said.  “I know it’s tough for you sometimes, having that much noise and activity.”

I shrugged.  It didn’t seem to matter.  Very little did, at that point.

“Do you understand why I wanted them all here today?” she asked.

“You were sitting shiva for her,” I heard myself say, distantly surprised by the words as they emerged.

“I was sitting shiva for her while she’s still alive.  How fucked up is that?”

I shook my head mutely.  Tears streaked both our faces.

In the year since that day, a year ago today, I’ve come to realize what an incredible gift it was for Rebecca.  To bring all those kids and adults who loved her so much into the house, all those people she’d known and loved all her too-short life — to give her a day of play and fun and craziness, the kind of craziness she loved, while she was still able to enjoy it — what better form of mourning could there be?

Rebecca knew, long before I did, possibly even before Kat did, why her friends were there.  She mourned the truth, and then had a fantastic day anyway.

I may have been far older than her, but she was far, far wiser than me. 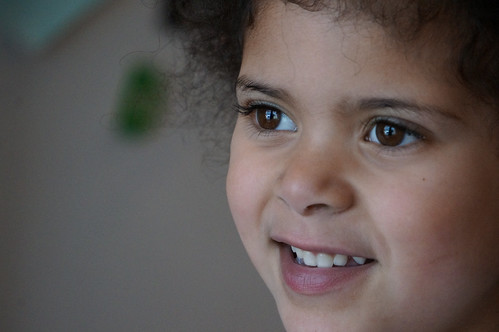 Browse posts in the Cancer or Rebecca categories.