As promised, here’s a picture of Carolyn. 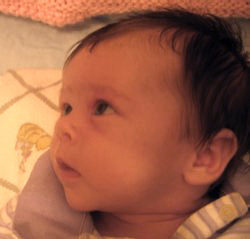 She’s six weeks old today, and though the picture is from a couple of weeks ago, she’s no less adorable.  The yellow cast to the picture is due to my penchant of shooting with no flash and a built-in “Vivid” filter on the camera.  I’ve switched it off recently, and although non-flash pictures still come out yellowish, it isn’t as pronounced.  Overall, it’s fine with me.  I like having warmer tones in my photographs.

I noticed a pointer to “What is Mac OS X?” over on Simon’s site, and eventually got around to following the link.  A lot of good information can be found there, there’s no doubt— I particularly enjoyed the startup sequence breakdown, the mere appreciation of which would seem to firmly establish me as a total geek— but as Simon says, the site’s design seems… familiar, somehow.  Almost like I’ve seen something very much like it before.

Actually, a few people wrote to inform me of the “design theft;” apparently the site got some major exposure by being mentioned on Slashdot recently.  I’m flattered that people recognized it as being a design I came up with, and I’m grateful that they took the time to let me know about it.  However, this isn’t really theft, so please don’t report it to Pirated Sites.  As I state in my newly established FAQ, meyerweb designs (but not the images used in them) are freely available for non-commercial use.  Credit is not even required, although it’s always appreciated.  I always meant to get around to explicitly assigning them to a Creative Commons license, but since I’m planning to redesign soon and will retire most of the themes when I do, it may not happen.  Or, then again, maybe when I retire them I’ll license them.

Anyway, I do get some nice namechecks from Amit, the site’s proprietor, on his About page.  One correspondent said he thought Amit was claiming to have come up with the designs himself, and I suppose one could read the text that way, but I didn’t.  As far as I’m concerned, Amit is welcome to use the design for his site so long as he doesn’t try to sell the design or otherwise make money off of the design itself.  And that goes for anyone else.

Browse posts in the Carolyn category.