I was recently at a conference where someone thanked me for my openness about Rebecca and grieving, and expressed their condolences.  And then they said, “She was obviously very sweet — ” to which I must’ve pulled a face, because they said stumbled to a stop and then said, “No?”

I reflected for a few moments.  Eventually I said something to the effect of her being more sassy than sweet.  I believe the words “a real firecracker” were used.  She was never malicious.  She was usually laughing.  She had her sweet side.  But it was just one of many sides.

I was reminded of this today when I came across a post by Elizabeth K., who has worked for years at the kids’ preschool.

I witnessed [Rebecca’s] defiance more than once.  But especially this one time, when Kat, never losing her temper and never wavering on the rules, amazingly sat calmly on the couch in our office as Becca refused to say “please” for a lollipop.  There were many “NO!s” when countlessly reminded all she needed to do was utter a simple word.  She never gave in.  She left without a lollipop.  She held her ground.  She was three.

You might say that every kid does that sometimes, but with Rebecca, it was pretty common.  She wanted things her way, and she was incredibly tenacious about it, willing to forfeit the thing she wanted rather than yield.  Filled with fire and determination, practically vibrating with the force of her will.  We had occasional fears about what she’d be like as a teenager, never suspecting.  We’d already quarter-jokingly agreed with her best friend’s parents that, when we eventually had to bail the two of them out of juvenile detention, neither of us would blame the others.

It’s incredible to think what I’d have given to have that experience.  And how angry and unthinkingly ungrateful I’d have been, had that come to pass.

…I love to visit the Kindergarten classes because many of the students are children who were in our Early Childhood Center and Daycare program the year before.  So I was welcomed with lots of “Lizzy!”s and “Look what I made!”s.  I was looking at Ruthie’s art project when Becca and I caught each other’s eye.  I told Ruthie how great her picture was and then said to Becca “You know what today is?” to which I got the famous side-eye.  “It’s no-hug day.  There are no hugs allowed today.”

She thought about it for a second and then leapt into my arms.  One of those great big hugs.  She loosened her grip, turned her head and whispered into my ear, “You were fooling.”  Sharp as whip.

“Yep.  But I got a hug.”  She gave me another classic Becca face, [smiled], and went back to her friends.

I count myself lucky to have been witness to her spark and her sparkling personality.  To say she will be missed does not cover it – not at all. 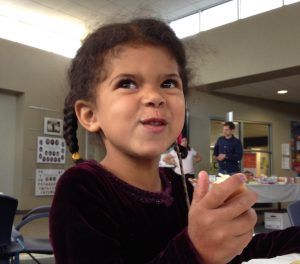 Browse posts in the Rebecca category.