Six years ago, we participated in our first St. Baldrick’s event.  Carolyn was preparing to shave her head to support Rebecca, who was still very much alive and, we thought, cancer-free.  And Joshua, the little brother at just over three years old, had apparently decided to do the same to his head, although he didn’t tell us until the day of the event. 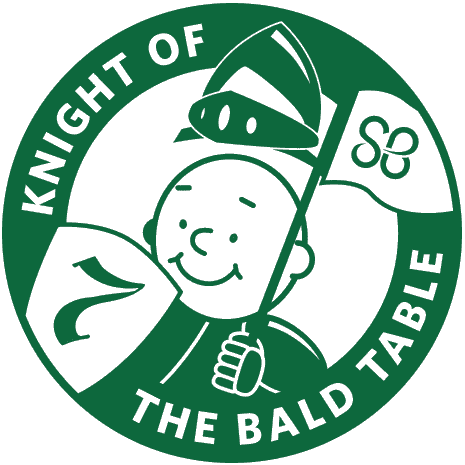 This year, Joshua will be participating in St. Baldrick’s for the seventh time in a row, shaving his head to raise money for and awareness of the campaign to cure cancers in memory of his sister at the Cleveland Heights event on Sunday, March 15th.  He’s been letting his hair grow all year for maximum payoff: literally, he has not had a single hair cut since last year’s St. Baldrick’s event.  He also recently had Carolyn dye it blue, which means he’s giving off a strong JRPG vibe.  (He rolls his eyes whenever I mention this.)

This being his seventh year, Joshua will officially become a Knight of the Bald Table.  In his honor, I will be his squire for the day — which means I will be shaving my head as well, for the first time.

If you can, please support Joshua’s knighting shave by supporting his fundraising efforts.  He’s set an ambitious goal, but I’m pretty sure that working together, we can well exceed it.  You can do it in honor of him, or in honor of his sister, or both; but please, if you can give him a boost, please do so.  Any amount will help, as will spreading the word on les médias sociaux.  Thank you.

Trying to Work From Home

Browse posts in the Joshua category.