Ordinarily, you’d think that an almost weeklong absence indicates a major project, or maybe an illness, or some other major life event.  Not this time.  This time it was a major computer hardware failure.  Not a hard drive, nor a monitor, nor anything you might usually suspect.  No, this was far more basic.

Not too long after I posted the previous entry, I was working on my TiBook in the living room.  Kat asked me to get something—probably a milk blanket or a pacifier or something baby related—and so I put the laptop, still open, down on the ottoman.

There was a sharp cracking sound.

As it turned out, it had actually been two cracking sounds.  Both hinges that connect the laptop’s display panel to the body had snapped clean away from the panel. 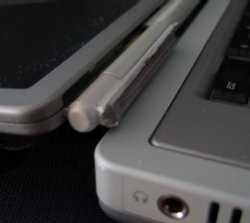 Longtime readers may recall I had a similar experience about this time last year while in Santa Fe, New Mexico.  Apparently that wasn’t some bizarre and isolated incident.  In both cases, I had let go of the laptop panel when it was an inch or two above a well-padded surface.  In both cases, something had given way.  Amazingly, in both cases the laptop screen continued to function.  The extra problem with this latest breakage was that since both hinges had failed, there was nothing to hold up the screen.

Luckily, a few months back an Apple Store opened up in a new mall about five miles from my house.  I’d been meaning to get up there and check it out; last Wednesday, I finally did.  I would have preferred better circumstances, obviously.  So I took my broken laptop to the Genius Bar.  As I opened it up and laid it flatter than a TiBook should really ever be, a guy standing nearby said, “Gosh, I’ve always wished I could open my PowerBook up that far.”

“I can show you how,” I said with an arched eyebrow.  He declined the offer.

So after looking over the whole machine and hearing my description of how it had happened, the Genius’ guess was that the hinges had been over-torqued.  They had been rather stiff ever since I got the machine, actually; it was almost impossible to open the laptop with one hand.  So Alan (the Genius) made some notes to the effect that it was a hardware failure, and not the result of abuse, and that it was a covered repair.  I changed the administrator password so they could get to the desktop if need be, shut down the system, and then handed the machine over to be shipped to a repair center.

It arrived back at the Apple Store today.  That’s five days to ship, repair, and return.  It’s one more day than the last time, but there was a weekend involved.  The new hinges are a lot smoother than the old ones, too.  I’m once more impressed by the speed and service Apple provides.  So thanks to Alan at the Genius Bar, to the unknown technician who repaired my poor baby’s spine, and to Apple for continuing to make me glad I’m a customer.  Of course I’d rather the laptop had never had any problems, but there will always be problems.  The mark of a good company is that they address those inevitable problems professionally and with a minimum of hassle for the customer.  As far as I’m concerned, that describes Apple in full.

Browse posts in the Mac category.