So here I am in warm, sunny Austin, which has been chilly and rainy.  I actually don’t mind, as the weather is quite nice for the time of year, compared to back home.  I have similar reactions in San Francisco, which every November I’m there is chilly but feels great to me, so I’m walking around without a jacket while all the locals are complaining bitterly about how cold it is, and I scoff at them.  But anyway, SXSW04 is well underway and things are as crazy as expected.  We had a fun css-discuss / Webdesign-L / WaSP / W3C / random folks gathering at the Iron Cactus last night, and I finally got to meet SImon Willison.  Actually, I’ve been expanding my rel="met" roster quite a bit, so that’s cool.

So after that gathering, which was organized by James Craig, a bunch of us headed over to the party thrown by frog design.  Wow.  It was very loud, extraordinarily crowded, and had just the right amount of decadence.  There was this big screen on which they were projecting some kind of frog design promotional video, all quick cuts and rapid strobing and MTVesque everything, except it featured stuff on which they’d worked, including the iPod.  Then the video player crashed, and they had to reboot the system.  I got a picture with Tantek standing in front of the screen as it started up. 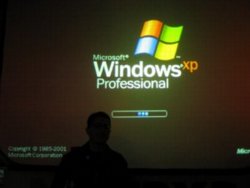 Thanks to the folks at frog design for giving us one of the funniest moments of the conference to date.  (This one’s for you, Scoble.)

When we entered the party, hostesses gave us little plastic cups with fake money in them.  Apparently you could gamble in the back, and with enough of this frog money could get little door prizes.  Or something.  I was amused by the fact that Tantek just walked around the party with a cup in his hand, and people kept stuffing their frog money into it.  He didn’t ask, didn’t say anything about the money one way or the other; he just kept being given more for no apparent reason.  Considering who employs him, that seemed somehow appropriate.

On Friday night I made a pilgramage to the throne of Lord British, or at least the temporary throne set up in Room 18AB of the Austin Convention Center.  Richard Garriott (whose works claimed many, many hours of my youth) and Warren Spector (ditto) talked about the current and future state of electronic gaming.  That was definitely enjoyable, as both men were good speakers and had just-different-enough views on the industry to make the session interesting.

I was encouraged to hear that they’re moving toward making online games less massively multiplayer, allowing people to find groups of friends and then let those groups continue playing without having to interact with the rest of the people online.  That sounds antisocial, but it’s actually more social than the current games.  I’ve avoided online games largely because I don’t want to have to deal with all the pre-teens killing my avatar and crowing about how I’ve been “0wnz0r3d.”  Sorry, kids, I have better things to do with my time.  If I could play interesting games with a restricted group of friends, though, I might be seriously tempted.  If Half-Life 2 comes out for Xbox with a good multiplayer component, that plus Halo 2 will probably be just about all she wrote.

Browse posts in the Speaking or Travel categories.