This morning’s panel seems to have gone well, although since I haven’t seen the audience feedback I’m basing that impression on the nice comments I got from people who talked to me afterward.  There was also a very low walkout rate during the session itself, which is always a good sign, especially in an audience as crowded as was ours.

At the Web Awards last night, where Dave Shea quite deservedly walked away with the Developer’s Resource and Best of Show awards for the CSS Zen Garden, Jennifer Neiderst Robbins‘ son Arlo got passed around between Jeff Veen, Anitra Pavka, and Steve Champeon. 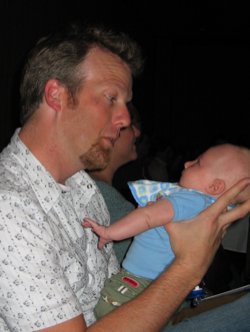 It was kind of odd to watch somebody else’s child be subjected to a round of Pass The Baby, and fun to be able to watch the holders without having to worry so much about the baby.  (It’s a parent thing—when someone else is holding your baby, you watch the baby to see what it does.  And to make sure it doesn’t get dropped.)  Arlo never did make it over to me, but that’s okay.  I’d far rather hold Carolyn.  I miss her, and I miss Kat.

During the end-of-day sessions, Tantek delivered a short presentation on XFN during the panel titled “Ridiculously Easy Group Forming.”  Strangely, he was really the only one to directly talk about the easy part, although the Easy Journal portion of the panel did cover ways in which the service is easy.  The audience seemed quite interested in XFN, which was very cool.  Of course, Tantek did a great job of presenting the important core lessons of XFN in relation to social networking solutions; these were, in effect:

There were many good questions about the structure of XFN from the attendees, to the point that Tantek was afraid he’d hijacked the panel.  I told him that the audience asked about what interested them the most.  In the cheap swag department, Matt printed up stickers and badge inserts that were large versions of the “XFN Friendly” image to distribute, and I spotted several attendees’ badges marked as being friendly.

After the day’s sessions I headed to the “Long Live Webmokey!” party, where I proudly wore my Webmonkey toque and finally met some of the staff members (like Kristin and Evany) with whom I’d swapped many an e-mail back in the day.  When the smoke drove me out of doors, I spent some time chatting with Steve Champeon and Pableux Johnson, who congratulated me on Carolyn’s arrival and were curious to know why Kat and I wanted children.  Even though I’d already had to think about and answer that question last year, I realized I didn’t have any better answer for them than, “It was important to us.”

Feeling worn down, I took in an excellent Italian dinner at Carmelo’s with Molly, Christopher, and Anitra, and then retired to my room for the night.  Shortly thereafter, a thunderstorm swept in from the west, driving rain through the streets.  I spared a sympathetic thought for all the people trying to get from one of the numerous parties to another, and enjoyed the lighting flowing from cloud to cloud and silhouetting the Austin skyline.

[Sorry this update is tardy, but the internet access died on my floor of the hotel last night, and once I reached the conference cloud on Tuesday morning I was too busy saying goodbye to everyone to get online, so posting had to wait until I got home.]

Browse posts in the Speaking or XFN categories.