It was twenty years ago today, under the wide-spreading boughs of a tree in the front yard of a house on Long Island, that Kat and I exchanged our wedding vows before a small crowd of friends and family.  Immediately after, we all moved to the tent in the back yard to celebrate.

The twentieth anniversary is, traditionally, the china anniversary.  Kat’s immediate reaction upon hearing this was that it makes total sense, since by 20 years you’ve probably broken most of your wedding china and need replacements.  For us, though, the resonance is a little different, since our honeymoon was a trip to China.  And therein hangs an origin story.

At some point in the late 1997, Kat and I were at a Meyer family gathering, probably Thanksgiving, at my paternal grandparents’ house in Cincinnati.  As was my wont, I was perusing the stacks of National Geographics they had always lying around.  Not like in a dentist’s office; no, these were always up to date.  But there were always many of them, interleaved with many similarly contemporary Readers’ Digests. 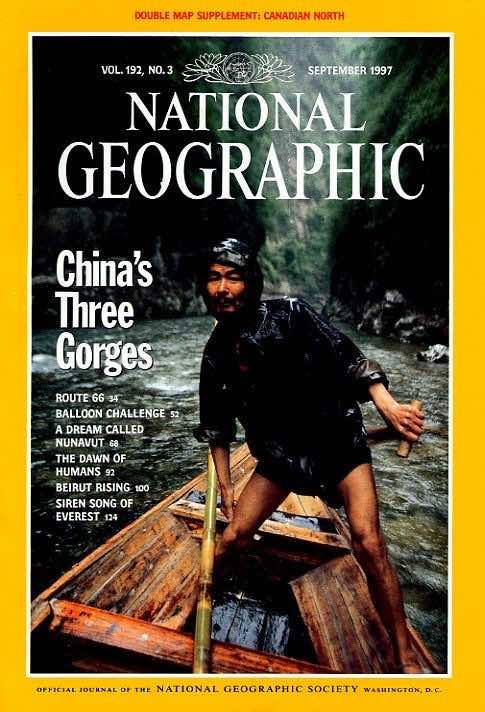 , and started leafing through it, eventually reaching the cover story.  It chronicled the incredible landscapes of the Three Gorges of the Yangtze River, soaring cliff faces and ancient villages.  I was immediately captivated by the story and especially the photography.  I decided that I wanted to see the Gorges before they were submerged by the Three Gorges Dam Project, which is the sort of snap decision I almost never make.  Usually I take time to analyze an idea and game out scenarios before reaching a conclusion, but not this time.  I was immediately certain.  I was certain enough to say it out loud to other people, like Kat and my parents and, who knows, probably a bunch of my extended family.

Now, fast forward a bit.  At the end of that same year, Kat and I were with my parents for Christmas.  We went out to dinner at Mom’s favorite spot for her birthday (also Boxing Day) and my parents said they had presents for me and my sister.  We each got an envelope.

Both of them contained checks for several thousand dollars, windfall of an inheritance distribution that Mom had insisted be passed on to us.  In mine, with the check, were a number of brochures for tours of China.

I was speechless.  Kat asked what it was a couple of times, a little bewildered by the look on my face.

And here I must take a side trip.  Kat and I had been on a trip to California a few weeks prior, just the two of us.  We spent a couple of nights at Ragged Point, a spot I’d stumbled over on a previous solo trip, back in the days when the rooms intentionally had no TVs or phones.  The restaurant was booked by a large group, so we ate dinner alone on the open patio under a heat umbrella, looking at the stars and enjoying the fantastic food; the chef at the time was a genius.  Music played softly through hidden speakers, and although we were literally sitting outside it felt as quiet and private as any candlelit back room.

“The Christmas Song”, generally better known as “Chestnuts Roasting on an Open Fire”, started playing.  Kat, smiling, asked me if I would like to dance.  So we stood and danced close together, slowly shuffling around the open space the way untrained dancers do, just us and the song and the stars.

Kat swears I drew breath and opened my mouth to ask her to marry me.  Maybe she’s right.  But I didn’t, then.  Nor the next day.  Nor on Christmas Day.  Which caused Kat to start thinking that maybe it wasn’t going to happen at all.  She was feeling disappointed and hurt by this, as you can probably imagine, but keeping it to herself because she wasn’t sure yet if she was right or wrong.

So: back to Mom’s birthday dinner in Mansfield, Ohio, and me sitting stunned by the check and the China brochures and this unexpected, unprecedented windfall.

“Eric, what is it?” Kat asked again, with some concern starting to color her words.

“We’re going to China!” I finally blurted out.

“No, you’re going to China,” she replied a little tartly.

Because in that moment, right there, I knew that this trip I wanted to take, the things I wanted to see so badly before they were gone — I couldn’t imagine doing and seeing all that without Kat.

That’s when I knew, beyond any shadow of a doubt, that I wanted to marry her.

I didn’t propose that night either, because I had to explain this all to her in halting, still-new words and help her (and me!) understand what had happened.  She got it, as I think I knew she would.  We went shopping for rings just after the New Year.  I formally proposed to her, shivering on an ice-crusted deck by the Chagrin Falls, on her birthday in March.

And on July 19th, 1998, we stood underneath the spreading boughs of the tree in the front yard of her childhood home, and exchanged our wedding vows.  A short time later, in a backyard tent in the heat of a mid-July afternoon on Long Island, we stood on the compact dance floor and danced to “The Christmas Song”, baffling half the attendees and bemusing the other half.

The next very day, we flew to China, and saw so much together over the next seventeen days: the Three Gorges, yes, but much more.  Suzhou, Dazu, and Guilin stand out in particular for being a little more remote and not so overrun by tourists, the kinds of spots we always find inherently more interesting than large cities and glitzed-up, polished destinations.  We still want to go back to Guilin some day.

In the two decades since we vowed to love and honor and respect and amuse each other, we’ve had many adventures together.  Some were incredible, some were stressful, and some I would have spared us both.  Picking out a card was difficult, with so many of them written as if 20 years together could never be anything but an unbroken stretch of bliss and good fortune.  We’ve been through too much to respond well to such bromides; we’ve had fortune great and terrible, difficulty and ease, endless joy and boundless grief.

Every one of those days and weeks and months and years, we’ve supported and shared with each other.  Kat’s been so strong, and so selfless, and I’ve tried to be the same for her.  Neither of us did so perfectly, but we always tried — and we always understood when the other had to nurse a weakness, or look inward for a while.  We have always been honest with each other, and accepted each other.  That, more than anything, is what’s allowed us to travel together these two decades and still love each other.

I couldn’t have asked for a better partner in life and death than Kat, and I hope she’s even half as proud of and grateful for me as I am for her.