Oh, sure, Kat and I have a baby and suddenly everybody wants to get in on the act.  I mean, honestly, how unoriginal can you get?

Okay, all kidding aside: our deepest and most joyful congratulations to the Zeldmans and their soon-to-be-larger family.  I can personally attest that, as many people told me, becoming parents is one of the hardest and most amazing things they will ever experience. 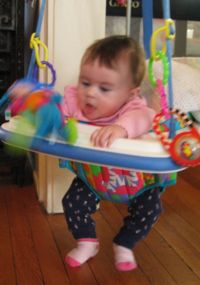 Carolyn’s in the range of four and a half months old now, and appears to be developing very nicely.  She discovered her hands a couple of weeks back, and is now busily trying to sample the taste of every object she encounters.  She’s almost to the point of rolling over; she can get onto her side for a minute, and then she rolls back onto her back.  She’s also a stander: she’ll stand upright for ten or fifteen minutes, if someone’s willing to hold her steady for that long.  We put up the “bouncy seat” a couple of months early, and she absolutely loves it.  She doesn’t even sit upright yet.  The pediatrician was actually kind of impressed by the strength and head control she has at her age.

Of course, we know of a baby two weeks older than her who already has two teeth, and another that’s rolling over constantly and getting close to sitting up on his own.  So it’s not as though we have a super-baby (though she is, obviously, a super baby).  She’s just ahead of the curve in some respects, and no doubt behind in others, the same as every other baby.

All I know is, whenever she looks at me with her gray-blue eyes and she breaks into an enormous smile, I can’t help but think she’s the most perfect baby in the history of the universe… the same as any other parent.

Congratulations again to Jeff and Carrie!

Browse posts in the Carolyn, CSS, or Personal categories.