So late this morning—that would make it the fifth and final day of the conference—I was doing what everyone else in the freakin’ conference was doing, and taking pictures of attendees while standing in the hallway.  As I held up the camera to get a high-angle shot of a group of friends, one of the badge checkers was suddenly leaning around me to look at something.  “You don’t have a press tag on the camera,” she said.

“You still have get a tag,” she said.

“You’re kidding,” I said.  But she wasn’t.  I offered to put the camera away, but she wasn’t really satisfied with that.  “You’ll just pull it back out again, won’t you?”

She was right, of course, but that just didn’t seem like a problem to me.  She said, “All right, I’ll tell you what.  When you get a chance, go down to the press booth and get a tag.  All right?”

Now, most people would have agreed just to get her to go away and ignored the request.  But me, I’m a little different.  My sense of the totally absurd had been engaged, and I decided to do just as she had suggested and obtain a press tag.  Porter Glendinning, having heard the story and possessing a similar sense of the absurd, came along to pick up one of his own.

So yes, along with Porter, I am now duly authorized and my camera tagged with badge #331 to indicate that I am an official SXSW Videographer/Photographer, and as such am permitted to take pictures of people standing around in hallways talking.  Also, I have official authorization to take pictures of people taking pictures with their own personal non-tagged cameras.  That’s fun too. 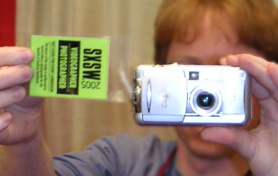 Browse posts in the Humor or Speaking categories.