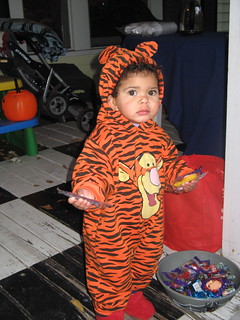 When Rebecca was almost 17 months old, she had her first real Halloween — the year before hadn’t really counted, since she spent the whole evening sitting in her bouncy seat dressed as a chile pepper.  It was a big occasion.  We dressed her in her Tigger costume and sat on the front porch with the bowls of candy we’d prepared for all the trick-or-treaters to come.  She loved candy and was thrilled to be sitting with her big sister and all that sweet stuff, even if we did keep telling her not to eat it.

Right on schedule, the first group of trick-or-treaters came up the front walk.  Carolyn, who loves giving out candy far more than she does receiving it, deposited a few pieces in each bag.  Rebecca watched this whole process very intently.  She watched the kids walk away, and saw that another group was headed up the front walk.  She looked at Carolyn, then the approaching kids, then down at the candy bowl in her lap.  Back up at the kids, then back down at the bowl.

And then she leapt up and took her bowl of candy to a far corner of the porch, hunched over her candy, defying anyone to take it.

Now if you offer her candy, you might get a nod or just a shrug.  Taking it from her elicits no reaction at all.

While she was never a super-chatty child, Rebecca was verbal pretty early and always happy to express herself, especially in disagreement or, really, any other form of opposition.  She was never shy about speaking up, a trait we subtly encouraged even as we tried to direct it.  If she thought you were being silly, she’d say so.  “Well that’s just lame,” she’s become fond of saying in the last few months.  Always with a little smirk, unless she really was angry.  The Brits would say that she absolutely loved taking the piss out of everyone around her, and loved even more that she could get away with it by making her target laugh along with her.

She barely speaks now.  Early in the day, we’ll get a few short sentences in response to questions or observations, but she almost never speaks on her own initiative.  A lot of her spoken answers are a clipped “sure”, delivered in a flat, almost bored tone.  Most of her communication with us is in the form of head shakes, nods, and shrugs.  Toward the end of the day, they become so subtle that only Kat and I can be sure what she meant. 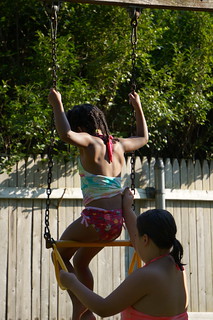 Rebecca was always athletic, running and throwing like a much older child.  Like a boy, we would have said in my unenlightened youth, but it was never really like that.  Like a gazelle, I once thought, knowing very little about actual gazelles.  She just threw hard and well, and ran hard and fast, and loved to do both.  I have pictures of her sitting on a trapeze bar, holding the ropes, and her posture looks like that of a seasoned circus performer, sinewy and controlled and poised to do great things.  She excelled in gymnastics, to the point that last summer they moved her up to an older class, placing her on track to join the competitive gymnastics team.

Now she can barely stand upright.  When she has enough energy to walk, she has the slow plodding gait of a clumsy toddler, weaving in unsteady curves from side to side.  When she reaches for something, always so slowly, her hands visibly tremble.  The most activity we see in her comes from obsessive, repetitive motions, pulling over and over at a loose thread or worrying the beads on a bracelet or picking tiny crumbs of food off a plate.

Rebecca delayed potty training mostly because she knew we wanted her out of diapers.  If we hadn’t encouraged it, she probably would have done it sooner.  But she put it off, and put it off, just because she could.  When she finally did, though, she was done.  There was no night-training period, and hardly an accident.  She just gave up diapers one day, on whatever impulse made her decide to do it, and never needed pull-ups after.

Until now, because she’s lost almost all control of her bladder and bowels.  At first she was mortified, but now the most she registers is a distant sort of anger at us when we change her.  We have to change her several times a day, and she just lies there, staring vacantly at the ceiling until we tell her we’re done.  Then, sometimes, she moves her eyes to look at us and wait for us to help her up.

She was full of energy, our Rebecca.  She was always dancing through life, Kat used to say, singing her favorite songs when there was no music to be heard and making a walk on the sidewalk into a skip-steppin’, butt-wigglin’ festival of joyful movement.

Now she sits inert for hours, staring off into space for long stretches of time.  We have to say her name loudly, and sometimes move her head to face us, before she suddenly snaps back.  Her eyes focus on us, the eyebrows raise a bit in query.  We ask her if she wants this or that, sometimes more than once, before she responds.  Sometimes, if she’s more with it, she’ll sit inert and look at one of us.  When I gave her a bath tonight, she sat up in the tub, but as the water rose, her legs floated upward with it, slowly tilting her body backwards until I had to put a hand on her back to keep her upright.  And the whole time, she stared half-vacantly at the chromed overflow drain cover.  At her reflection in it.  At the person there, who I cannot be certain she recognized as herself.

Everything we felt so fortunate to have kept, all her intact neurologic function and physical health and vitality, her ineffable sun-bright spark, have been leached away.  She is dying by slow millimeters, sinking further and further into a miasma of lethargy both physical and mental.  All her emotions crushed flat by the rising pressure in her head.

For all that, she is still Rebecca.  She shakes her head no when she knows we want her to nod yes, and if there’s no smirk to go with it, maybe we can see the faintest echo of a crinkle around her eyes.  When we verbally fence her to the point that no isn’t an option, she just looks at us as if she has all the time in the world to wait out our interest, her eyelids slid just a fraction shut to register her disdain for our feeble attempts to outwit her.

At bedtime, Kat read Rebecca “Madeline”, a favorite they’ve long shared.  Rebecca was so drained that she was basically asleep before we put her in bed, but as Kat started reading, Rebecca’s eyelids slid partly open, her eyes rolling a bit before the lids fell shut again.  Her eyes kept cycling through this, over and over, as Rebecca fought to stay awake enough to hear her mother read her a beloved bedtime story.  She kept fighting until the closing passge:

“Good night, little girls!
Thank the lord you are well!
And now go to sleep!”
said Miss Clavell.
And she turned out the light —
and closed the door —
and that’s all there is —
there isn’t any more.

And as the last syllable passed Kat’s lips, Rebecca’s eyes stilled and she sank deep into sleep.

She lies sleeping on her back, her arms at her side as though not just asleep, but actually unconscious.  She has always been a side-sleeper, ever since the day she was born.  Now she lays inert, her head straight on her pillow, as if rehearsing for the casket she will never occupy.  But when a friend came in to give her kisses, she turned her head slightly, her brows drew together a bit in annoyance, and she folded defiant arms across her chest — still sleeping.

Her pulse is still strong and regular, and her breathing is slow and steady, the calm notes of a child at rest.  She relaxed her arms a while ago; they still lie across her chest, but separated a little bit.  Her jaw has stopped constantly working in her sleep, another new symptom we don’t know how to interpret.  Maybe she was dreaming of chewing gum, one of her favorite things in the whole world.  Maybe it was something very different, and much worse.  It still happens every now and again.

Earlier tonight, I was convinced by all these little clues, and a hundred more, that she would die tonight.  Now I’m not so sure.  The slow rhythm of her breathing gradually carried me from stupefied terror to a quiet reflection.  Now, as I stand guard over her sleeping body, I can look at her still, beautiful face without fear.  I can believe that she’ll wake tomorrow, no more herself than she was today, maybe even a little bit less so, but still going.

Still fighting to stay awake, stay alive, stay with us.

Browse posts in the Cancer, Parenting, or Rebecca categories.