In rummaging through my pictures from last weekend’s trip to San Francisco, I came across another picture I just had to share: the laundry machines where Jeff Veen‘s clothes get washed and dried! 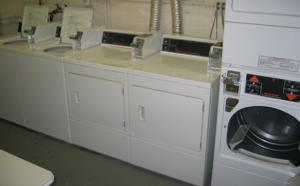 They seemed bigger than normal machines, somehow.  As if they were mighty colossi of laundry machines, towering over the cleanliness landscape and emitting peals of spin-cycle sounds that shake the skies like thunder.

Then again, I could just be projecting.

So what’s with all the pictures all of a sudden?  Partly it’s me messing around with the export features in iPhoto, which are frankly not the greatest.  It generated tons of “jaggies,” and in JPEG images, no less.  I need to find some tools that do a better job, or at least some decent plug-ins for iPhoto.  I think I said that some time back.  It’s more true now than it was then.  (Speaking of which, is there a trick to adding folders to the Dock?  I can’t seem to figure it out.)

Over the past few days I’ve run into two very familiar forms of grumbling:

These aren’t new complaints, by any stretch.  Heck, I myself whined long and loud about how XHTML forced everything to be lowercase—I called it “xhtml” for the longest time—and those trailing slashes looked stupid.  Over time, I realized those were silly reasons to dislike a language, especially since HTML is still around and quite available.  (What’s this site authored in?  Hmmm…)  I realized I was ambivalent toward XHTML not because it was pickier, but because it was a reformulation of HTML in XML.  That was exactly its point, and while I could see some utility in that effort, I thought (and still think) it a mistake to abandon all further work on HTML and push forward with XHTML.  I couldn’t come to that conclusion, however, until I stopped carping about things being different and took the time to understand why things were different.

As for CSS-P, of course it has limitations.  So does table-based layout.  The question is which set of limitations you’re willing to accept, and conversely which features are more important to your current project.  I still fail to understand why people have to treat everything as being a binary situation.  It’s not a question of only using tables, or only using CSS, for layout, forever and ever amen.  Some projects do well with one, some with the other, and some call for both in the same layout.  I don’t know how many times I’ve said this over the years, but I guess I’m saying it again.

And if you object to something simply because it’s new and doesn’t act like the stuff you already know, take it from me: that form of resistance isn’t going to work for long.  If you can’t deal with change, you’re on the wrong planet, and if you’re a Web developer/designer then you’re really in the wrong line of work.  Things will always change, whether it’s due to new browsers or new standards or new critical patches from Microsoft or just plain new thinking.  Your best bet is to learn as much as you can so that you can make the best possible decisions about what to do, and why.

Browse posts in the CSS, Mac, or Web categories.