Long-time readers may recall my ranting about iLife 4 being a for-money upgrade, which in the end was as much about my lack of understanding as it was about Apple’s (perceived) silence on the subject.  As it turns out, I never got around to buying iLife 4, so I was happy to have it bundled with my new PowerBook.  That’s right, folks, I spent over $2,000 on a laptop, but I saved $49 in the process!  Ph34r my l33t sh0pp1ng sk1llz!

So I imported my entire iPhoto library into iPhoto 4, which only took about 45 minutes.  In the process, I discovered that I actually have 4,080 photos so far.  There was some weirdness, in that iPhoto 4 claimed to have discovered 234 “lost” images.  Under half were duplicates, and the rest were completely blank files with the same names as photos I already had.  So I threw them all away, and landed at 4,080 pictures.  Once I figured out the keyword interface, which is by no means intuitive (or even very usable), I set about adding metadata to some of my images.  The first order of business, of course, was to tag all pictures of Carolyn and organize them into a smart album.  Guess how many pictures I’ve take of her so far?  We’ll have the answer in a moment, but first, here’s a recent one of her sitting up on her own, which she started doing a couple of weeks ago. 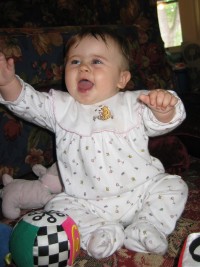 Everything I’ve heard about the improved speed in iPhoto 4 proves to be correct, and possibly understated.  This thing screams.  It still generates bloated directories, though, given the number of XML files and image copies it’s capable of producing.  This is largely so that it can support a “Revert to Original” feature, so any time you take out red-eye or lighten up an image, you end up with both the original and the modified image on your hard drive.  The same happens if you do no more than rotate an image.

That’s where iPhoto Diet comes in so very handy.  It’s a small application that can get rid of all unnecessary duplicates in your iPhoto library, and it can also delete the originals of all rotated images.  It can also wipe out all the originals, replacing them with the modified versions.  I ran it on my library before I migrated to the new machine and reclaimed over half a gig of drive space.  And that was only getting rid of unnecessary and rotated duplicates, not all originals.  I did a lot of red-eye reductions, and those are still around.  I also have yet to run the “strip thumbnails” option, which could easily reclaim a few dozen megabytes.

I haven’t really played with the rest of the iLife suite since I don’t have a video camera or a garage band.  I may eventually burn some images to a DVD for relatives to play on their TVs.  If I can figure out how to use Garage Band, I might try creating some background tracks for use in radio production work.  It’s nice to know the options are there.

And the answer to today’s trivia question is: as of this writing, the smart album titled “The Compleat Carolyn” contains 1,832 pictures.  At this rate, we’ll have about three thousand pictures of her by her first birthday.

Browse posts in the Carolyn or Mac categories.