For Thanksgiving, we visited Kat’s parents in the West Palm Beach area, where they retired earlier this year.  When we left Cleveland on Thanksgiving morning, it was snowing—the first snowfall of the season for us.  It was clear that it would build up a dusting, and then melt within a day.  Where we were headed, it was in the seventies.  A part of me wished I could have stayed with the snow.

But off we went, and had a wonderful dinner with Kat’s parents and brother Neil.  After dinner, Uncle Neil taught Carolyn how to work the stacking-ring toy we brought along, and his efforts paid off in spades.  She’s been pulling rings off of the toy and putting them back on ever since, although she still hasn’t quite worked out that whole “largest-to-smallest” thing.  It’s pretty amazing to see how fast she went from not understanding to clumsy attempts to get it right to being an old pro.

Best of all, there was a prize embedded in the center of our trip:  we drove up to Disney World to spend the night at the Contemporary Resort and take Carolyn to the Magic Kingdom for the first time.  We had dinner at the Liberty Tree Tavern, an establishment whose name strongly and incongruously reminded me of Thomas Jefferson’s dark aphorism.  After dinner we watched the Christmas parade go past.  Well, actually, Kat and I watched it; Carolyn slept soundly through the whole thing, thus proving my assertion that when she’s fallen into a deep sleep, you can march a brass band past her at full volume and not wake her up.  The parade marched two of them past her.  Snores galore.

The next day, we had breakfast at Chef Mickey’s, rode a few rides, saw the new “Philharmagic!” show (highly recommended), and then headed back to West Palm Beach with my father and his wife, who had met us that morning.

There were two things I observed at Disney that completely astonished me.

The first was that all the children, the same media-savvy world-weary jaded children we keep hearing about in the media, totally buy into the ‘magic’ of Disney.  They relate to the costumed cast members as if they were the real thing; when “Mickey” comes by the table to dance a little jig and pat the kids on the head, they don’t see quote marks.  It really is Mickey, as far as they’re concerned, and even if they know on some level that there’s someone inside a costume, they gladly ignore that knowledge and go along for the ride.

The second thing was that Carolyn, against all my expectations, totally got that the costumed characters were in some way special.  I expected her, even at nearly a year old, to regard the characters as slightly strange people, and not significantly more interesting than anyone else.  Not so.  At first, she was a little hesitant, but with each new character she got more and more excited about them.  You can see in the pictures just how comfortable she became: she’d only learned to give kisses the week before, and by the end of dinner gave Chip (or Dale) a kiss.

At breakfast the second day, she spotted Chef Goofy standing alone near the entrance to the restaurant.  She immediately let go of my hand and toddled toward him.  He sat down, and she went right into his arms for a big hug, then sat down next to him and looked up into his face.  As I took pictures, I heard several people behind me saying things to the effect of it being darned near the most adorable thing they’d ever seen.  A woman sidled up next to me and said she hoped I’d gotten it all on video.  I hadn’t, but that’s okay.  The pictures I did take tell the story well enough.

I don’t know what it is about Disney; maybe they put something in the water.  But it really does create a kind of magic.

All too soon, it was time to head back home.  Like any good parent, we want our child to be as safe as possible, so I was greatly heartened to see her taking the time to look over the important safety information printed on the card found in the seat pocket in front of her. 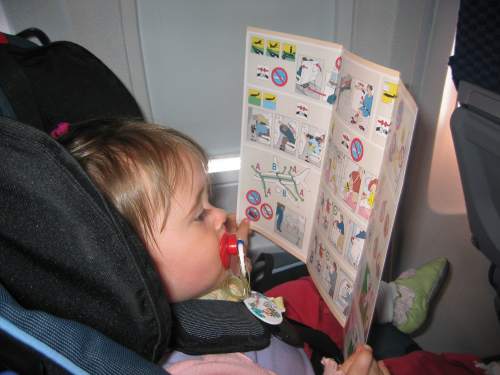 Once With Heads Held High

Browse posts in the Carolyn or Travel categories.