When you withdraw for a couple of weeks, all kinds of stuff piles up—in the house, in the Inbox, in life in general.

During our Passover seder on April 17, I spotted a label on a bottle that cracked me up.  Since I’d acquired a digital camera just the day before in hopes of taking pictures of both our families at one table, I couldn’t resist capturing the label for posterity, so I’ll share it with you. 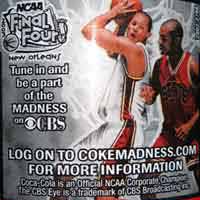 Somebody really needed to think a little harder about their domain name choice.  Then again, had they done so, I’d have been deprived of a good laugh.  Hey, maybe they’re going back to their original recipe!  Wouldn’t that be fun.

The day after Mom’s death, Netdiver published a close-ups* interview with me.  You’ve probably already seen it, but if not, there you go.  It’s long, but that’s mostly due to it having a lot of questions, some of which were actually difficult to answer.

Chris Casciano updated his PNH Developer Toolbar to fix some typos, add more links to useful tools, and make the toolbar work in Phoenix/Firebird as well as Netscape/Mozilla.  I don’t think I mentioned the toolbar here before, so let me just say it’s insanely useful and thoroughly awesome.  I’m already becoming addicted to it, especially in conjunction with the DevEdge Sidebar Tabs, which lets me drill into various W3C specifications quickly and easily.

Everyone got all upset at Dave Winer, who in turn got upset with everyone; things were said, mistakes were made, meanings were imposed and decomposed.  If it hadn’t started with a post about designers and CSS, I wouldn’t even bother to mention it.  My reaction: everyone over-reacted.  Dave didn’t say in that particular post that there was anything wrong with CSS, although he did make some interesting statements about what works and what doesn’t.  Of course the advantages of using CSS are fairly self-evident to anyone paying the slightest bit of attention, and (to my eye) far too compelling to ignore or eschew.  There are indeed flaws and omissions both in browser support and the CSS specification itself, but that’s never stopped anyone.  Meanwhile, anyone who’s using CSS as a political club of some sort needs to cut it out.  CSS is a technology, and a good one that promises to get better.  It’s not a religion, despite the odd quasi-religious titles people keep affixing to my name (“CSS Pope” being one of the funniest).

On an oddly related note, Jeffrey and Tantek and Matt batted about thoughts on RSS, syndication, hand-rolling a weblog, and so on.  This particular journal (as I call it) is basically hand-rolled, and for a long time I manually updated the current entries and archives: when I added a new entry to the home page, I’d cut the least recent entry and paste it into the archive page.  That worked so long as I posted weekly and didn’t want to do anything else with the entries.

But then I started hearing from people who said that without an RSS feed, they couldn’t keep track of a site.  I write these entries so that people can see them, and I was sort of interested in RSS anyway, so I decided that I needed a way to set up a feed and automate the process of managing the entries.  As long-time readers will recall, I accomplished this by teaching myself XSLT and using it to create a very minimal content management system of my own.  Entries are written in an XML format I derived from RSS itself, and I run the XML file through a series of XSLT recipes to produce the most recent entries on the home page, the archives, and the RSS feeds.  I suppose I could also create messages to e-mail to people who signed up for them, but I’m not up to that yet.

So anyway, I agree with what Jeffrey says about pouring an entire site’s contents into an RSS feed: why would I bother?  Part of the experience of reading a personal site is how it looks, the way the words are arranged, the layout of the content.  So I’ve been doing basically what Jeffrey is now doing, and dropping the first sentence of each entry into the feed.  That keeps the feed small, it allows people to know when I’ve posted something new, and gives them enough information to decide if they want to go read the new entry.  It also forces me to think about writing good lead sentences, since an entry description of “I just had a thought….” isn’t nearly is interesting as “I was pondering the relationship between XSLT and CSS, and had an idea I think is pretty cool….”

(Incidentally, those of you chastising Jeffrey for “selling out” need a serious perspective check.  Try some deep-breathing exercises while you’re at it.)

Matt observed that I should drop the plink class on the permalinks and use a contextual selector to style them, and that I should add rel="bookmark" to the permalinks.  The latter I’ll implement in my next XSLT update, as I should have done long ago.  The former, however, I’ll probably not do just because I like having a class that applies only to the permalinks and nothing else.  I might decide in the future to move the permalinks from one element to another, and I don’t want to have to juggle a bunch of selectors when I do.  The structure and design of the site are always in a slow state of evolution, so I try to plan for future mutations as best I can.

That’s one benefit of hand-rolling the whole system.  I can plan ahead with the greatest possible clarity because I know exactly how everything is put together, and how changes to the structure will affect the layout and experience.  I can also make sure the site’s markup is as lean and relevant as possible, because the most advanced document optimization tool ever devised is still the human brain.