I’ve been wandering from place to place in the Mission District of San Francisco all afternoon with Doug and Tantek, searching out open WiFi access points that also have open power outlets.  We were hanging out at Maxfield’s for a while, but then a live jazz band started playing and we couldn’t hear each other talk. 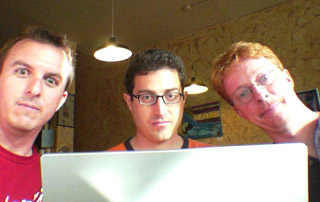 So we moved on, and after snacking on some New York-style pizza (!) have now settled in Muddy Waters on Valencia.  What relevance has any of this?  Not a lot, but it’s a great excuse to post an amusing picture Doug took with his Sony Vaio TR1AP.

Seybold starts tomorrow, which means I get to show up at Moscone West way too early in the morning to register, get oriented, and get ready for the panel “Speaking in Tongues,” which will discuss the wide variety of standards and choosing which is best for you.  Later in the day I’ll present “Bridging the Browser Divide,” a look at the state of standards support.  Tuesday, I’ll do “CSS For Navigation,” a slightly reworked version of “Minimal Markup, Surprising Style” (which provided many of the examples in the Listamatic), and then participating in the closing plenary “Future Vision: The Web and Beyond.”

I’d better get some future vision by then, I guess.  Think the audience will take me any less seriously if I tell them the Web doesn’t really matter because we’re due to be subjugated by the barbarian hordes of Pluto in the next three years?  Think anyone took me seriously in that last sentence?

As much as I like visiting San Francisco and hanging out with such cool people, I can’t help looking forward to my return home.  I fly back home on Thursday, which means that for the third year in a row I’ll start September 11th in the San Francisco area.  At least this year I’ll end it back in Cleveland, unlike the last two.  Contrary to the expectations of some people I’ve talked with, I have no apprehension about flying on Thursday.  I figure if there’s one day of the year that’s safest to fly, it’ll probably be that day.  Besides, I’m done with conference and client stuff Wednesday evening, and I intend to get back to Kat as soon as possible.

…the Weird Get Going

Browse posts in the Personal or Travel categories.