Yesterday, I finally cleaned out my old desk, which is now Kat’s desk, so she could make use of the drawers.  More than a decade’s worth of mementoes, knick-knacks, toys, scraps, and other oddities were there to be sifted.  It was like digging back through my own past, a sort of temporal archaeology.  There were even pieces of other men’s lives, like my father’s old Zeiss-Ikon camera, still in perfect working order, lent to me years ago and never reclaimed.  Since the desk itself originally belonged to a great-grandfather of mine, the sense of history surrounding the whole process was even heavier.

Not that it wasn’t fun to dig back into the past!  I threw out a whole bunch of stuff, of course, but all my old Animaniacs fast-food toys went to a good home, and I salvaged a number of wall signs whose origin is murky indeed.  So too I rescued some college-era photos, a box of stationery, assorted shoulder patches, and old conference passes. 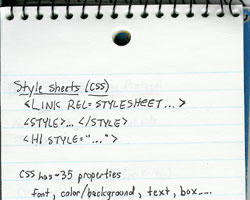 And then, in a medium-size blue notepad with the name “Lysa” inexplicably written across its front in thick black marker, I found several pages of handwritten notes regarding HTTP 1.1, HTML 3.2, PICS, and several other technologies.  These were the notes I took sitting in the W3C track at WWW5—and there, in the middle of it all, were the notes I took as I encountered CSS for the very first time.  I checked the agenda for that conference, which was still with the conference pass, and discovered that the date for the presentation “Cascading Style Sheets and HTML” was Wednesday, 8 May 1996.  That was a good seven months before CSS1 was made a full Recommendation.

It’s a distinctly odd feeling to hold this loosely bound collection of paper in my hand and think about all that sprang out of that one, simple little page.  I was also amused to see that my notes, as minimal as they are, don’t validate (can you spot the error?)

There were other things rescued from the desk cleaning yesterday, of course.  There’s a box of memories sitting in a corner of my office now… but this one notebook made the whole experience worthwhile.  Just for a minute, as I flipped to that page, I remembered once more what it felt like to be completely blown away by a new technology and to know, beyond any doubt, that it was going to change my entire life for the better.  At the time, I just thought it would make my Webmastering job both simpler and more interesting, but even then, it was enough.  There was an incredible promise there, and I wanted more than anything to see where it led.

I still want that, even today.  For all that’s been learned, and all the things that have been done to make CSS the important piece of Web design it’s become, there is still a vast amount of uncharted territory.  I haven’t added anything to css/edge in quite some time, but the statement made there is still true.  We haven’t figured out everything CSS can offer us, even today, and as support improves and the specification is enhanced, we’ll be able to do still more.

I can hardly wait to see what’s next!

Browse posts in the CSS, History, or Personal categories.