On the last day of shiva, this past June, we got a letter in the mail.  Just by looking at the envelope, I could see that it was a note of condolence, and from a nearby address to boot — yet the name was entirely unfamiliar.  When I opened it, I discovered a handwritten note that started with a perfunctory condolence and then immediately turned to extended proselytizing.  Enclosed was a religious tract specifically about the afterlife.

From the actual text, it was clear the person who wrote it didn’t know us at all, didn’t know the first thing about us or what we had just gone through.  They had simply trawled that week’s obituaries to get our names and address, and proselytized by mail.

I wish I were making this up.  But no, someone really did decide that the occasion of our daughter’s death was the perfect time to thrust their religious recruitment efforts into our lives.  Artisanal bereavement spam, basically.

I tweeted about it, leaving out identifying information, but otherwise let it go.  An unfortunate one-off, I figured; someone with more fervor than sense, not to be taken as representative of the group as a whole.

Except it just happened again.  Different person, same religion, same basic approach.  This letter isn’t as glaringly obvious about the obituary trawling, no hollow claims of sympathy or condolence this round, but the handwritten emphasis on seeing dead loved ones again makes it pretty obvious that this is of a piece. 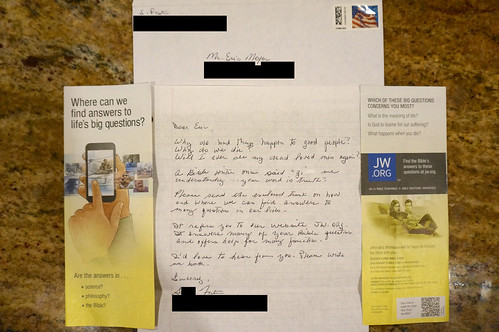 So, yes.  The Jehovah’s Witnesses apparently think it is a fine idea to vulturously circle the misery of others and then swoop in to deposit a load of tract on the dining room tables of grieving families.  And what’s more, to keep doing it.

I disagree.  I don’t even beg to differ, I simply disagree.  If there were an opt-out mechanism, I would most certainly make use of it.  In so doing, I would include a number of comments regarding their apparent need to hide their intent with misdirection and to prey on the extreme pain and emotional vulnerability of others.  Since no such mechanism appears to exist, this post will have to do.

Of course, just as I did the first time this happened, I handled the note, the tracts, and the envelope itself with every bit of the care and respect they deserved. 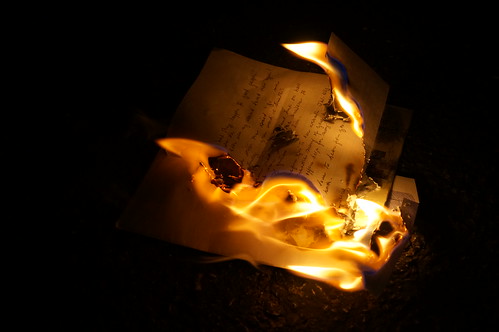 I Googled around a bit and only found two posts about this practice (“Are Jehovah Witness Members Trolling Obituaries for New Recruits?” (2009), “Letters from Jehovah’s Witnesses” (2013).  Well, here’s a third, this one backed up with visual evidence.

I’m posting this in case others experience the same thing and wonder if they caught a lone crazy.  I’m sorry, but no, they aren’t “lone”.  If you got one, you may well get more.  I very much wish it were otherwise.

Browse posts in the Cancer, Personal, or Rants categories.