Posts in the Cleveland Category

There’s the World Tour, which is exciting and all that, but then there’s the fun of hometown gigs.  It just so happens that I have two coming up in the near future.  Here they are, along with some brief information on what I’ll be talking about.

I’m also speaking at the NASA Glenn Research Center this afternoon, but that’s an internal gathering, not a public event, which is why I didn’t mention it before.  I haven’t been there since the late 1980s, so it’ll be interesting to see if anything’s really different.

One of my long-time favorite places to eat is Yours Truly, which is a local chain of sorts—well, to be honest, they’re more of a local institution in seven locations—and whose Web site lends serious support to my theory that site quality is inversely proportional to food quality.  They also have free WiFi at the location nearest us, not that I ever happen to have my laptop along when I’m there.  But there’s always the possibility of using it.

In a menu full of good things, one of my favorites is their Notso™ Fries (“They’re notso common!”).  To make a plate of Notso™ Fries, you first pile up some cottage fries, which are those little round crinkle-cut jobbies.  To the fry pile, you then add a whole bunch of cheese.  Then crumbled bacon, and I think more cheese.  The whole plate is then broiled until the cheese is golden, and just before serving you plop on a generous dollop o’ sour cream.

I had long thought that this wonderful dish represented, in some sense, the apex of cholesterolicious cooking, but this morning I discovered that I was wrong, that the fine folks at Yours Truly had gone themselves one better and given us…

Substitute hashbrowns for the cottage fries but keep everything else the same, stuff the result into a three-egg omelet, and put the sour cream on top.

Just a quick note for people in the Cleveland area: I’ll be giving a talk this Saturday, 22 January, at the meeting of the North East Ohio Apple Corps in Strongsville.  The topic will be turning your Macintosh into a powerful Web development environment using resources, scripts, tricks, and tools available for free.  If you’re interested, drop by, and if you need directions, check out the NEOAC Web site.  I’m told that there will be donuts.  Mmm…. donuts.

I quick-linked 10 Things to Do in Cleveland Before You Die, but the more I looked at the list, the less happy it made me.  So I’ve decided to compile my own list.  Note that this list doesn’t include restaurants.  As much as I love to eat, I just don’t think that a single meal is worthy of a “things to do before you’re dead” list, no matter how amazing the meal.  I might compile a separate “Ten Places to Eat In Cleveland” list, but that’s a subject for another day.

I have to be honest and admit that I haven’t even done everything on my own list.  However, I suspect that as our kids grow up, we’ll do all of those things more than once.

You’ve probably already seen the Gurus vs. Bloggers matchup over at Design By Fire; I quite enjoyed it, and not just because it’s funny.  I found it to be gratifying because I took a close look at the designs, and I think there’s very little doubt about it.  meyerweb’s design just screams “guru,” don’t you think?  (David Robarts does.)  I’m kind of hoping that I get into a future round of the matchup, so I can by completely demolished by the likes of Dave Shea or Doug Bowman.

Of course, I can always counter with cute pictures of Carolyn. 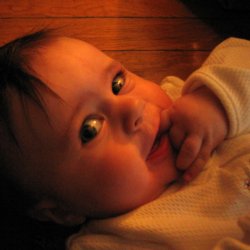 She’s suffering through another cold, but that doesn’t seem to prevent her from being just too adorable for words.  Now, I know it isn’t the right finger, but I still can’t help thinking, “One billion dollars!”

For some reason, Kat and I like the show $40 A Day, where host Rachael Ray visits a different city each week and goes through a full day without spending more than $40 on all her meals.  One of this past weekend’s episodes had her visiting Cleveland, calling it “one of the most underrated cities in America.”  Kat and I found it fascinating to watch, getting an outsider’s perspective on the city.  We don’t have the time or space for me to enumerate everything great about this city.  Nonetheless, it was still interesting to hear words of praise from a visitor, even one hosting a show that does what are basically puff pieces about the visited cities.

It didn’t hurt that two of the three restaurants she visited were the always-excellent Tommy’s (where the waiter shown on-camera is one of those guys who’s been there forever) and Trattoria Roman Gardens down in Little Italy, not to mention spent some time at the West Side Market.  I thought the show could have done with a few less “___ ROCKS!” jokes—okay, we get it, the only song the rest of the country associates with us is “Cleveland Rocks.”  Thank you.  It’s time to move on.

Of course, I suppose I might be tired of the whole “rocks” thing because it’s a lot like having people always tell you the sky is blue.  After a while, it gets to be a little bit wearying to keep being repetitively told something you already know.

Imagine my surprise to discover that an off-hours bit of work done with a couple of colleagues got a mention in the mainstream press.  XFN, which seems to be spreading through the blog world and is generating some very good feedback, was mentioned in a Seattle Times article titled “Social networking beginning to take shape on the Web.”  I’m amused that years upon years of work on CSS, which is arguably a cornerstone of the modern Web, netted me (so far as I know) exactly zero newspaper coverage, while something to which I made minor contributions merited ink within a month of its launch.

With that article still fresh in my mind, I received something like my fourth or fifth invitation to join LinkedIn, which was mentioned in the very next paragraph after the bit about XFN.  Since I’m rather interested in social networking technologies these days, I decided to set up an account and experiment a bit—do some compare-and-contrast between LinkedIn and XFN, from a user’s point of view.  It’s interesting, but I’m not sure I quite grasp the point of it.  Are links intended solely to deliver prospective clients to vendors?  Or is it supposed to be a way to show who you know, and thus who they know, and so on?  For myself, I’ve decided to limit my connections to people with whom I’ve had some contact professionally.  So if you’re a member and want to invite me, go ahead.

One of the people I did invite to link to me is George Nemeth, Cleveland-based superblogger extraordinaire.  I dropped by his site to see what he’s talking about, and spotted a link to a LEGO® recreation of M. C. Escher’s Relativity.  The same people also did Ascending and Descending, and a few others besides.  Color me impressed!  From there, I visited some other LEGO®-sculpture sites, finding at one point a really large model of a stegosaur, which was even more impressive, both from a sheer achievement point of view as well as a testament to the amount of free time some people have available.  And check this out: the guy who came up with a model of the Nebuchadnezzar, a mostly working badger, and a whole bunch of other LEGO® sculptures besides, lives right here in Cleveland.

Like how I came full circle with that one?

If you’re on the east side of Cleveland and want a nice warm caffeinated place to get online, the new Arabica on Lee Road, just a block or so south of Cedar-Lee, is the place to be.  The network SSID is 2WIRE173; it is a closed network but they’ll tell you the password at the counter.  Note to Mac users: you’ll need to enter the password as a 40-bit hex key, not as a plain password.  Something about their security setup causes this, although neither I nor they knew exactly what that might be.  I figure it’s no big deal, since once you enter the information and add it to your Keychain, you’ll never have to worry about it again (unless of course they change it).

The weeklong break is over.  Now I start a weekend break.  Meanwhile, a few things that flitted across my radar while I was away:

That’s it for the moment, but I hope to have a new site and some new content to share with you on Monday.