Posts in the Food Category

So how about it—are French fries really the universal food, or is there a counterexample?

(Addendum: if you do dislike French fries, please tell us what it is that causes you to dislike them.  Is it taste? Texture?  Smell?  Something else?  Inquiring palates want to know.)

Last week I asked for suggestions regarding a good book on the conservative perspective, and to date, I’ve had six responses.  Three were from conservatives making suggestions (none of which overlapped), two were from liberals recommending books they liked, and one was a request to share whatever I learned.  I would, except I don’t feel like I know enough to make any recommendations.  On the other hand, Valdis Krebs has created an interesting map of recent top-selling books in this area (spotted over at Brewed Fresh Daily).  Check out the white paper, which details the methodology for creating the map.  He doesn’t list Red, White & Liberal, but a quick check of its Amazon “also bought” list reveals that it links up with four red dots and one blue dot on Valdis’ map.  Interesting…

I just noticed that Matt Haughey lists meyerweb as a blog he reads, which is really rather cool.  I should return the favor, as I do drop by there every now and again.  I also notice that he has never visited Ohio, and is apparently of a mind to undertake a major road trip to fill in the voids in his lifetime itinerary.  Maybe I can get him to drop by for some tea and crumpets… or maybe some really good sushi, tasty Ethiopian, possibly some great chicken ‘n’ waffles.  Note that I’m not in any way responsible for the sites to which I just pointed; I sometimes think that there’s an inverse correlation between the quality of a restaurant’s cuisine and that of its Web site.  We can only hope the same is true of WWW2004, because the both the current and previous conference sites have been… substandard.  Sub-standards, in fact.

Speaking of food, which I was, we’ve recently discovered halloumi, a truly miraculous Cypriot cheese that is a touch expensive but oh, so worth it.  You can literally put the stuff on a skewer and grill it without it melting, and the taste is if anything better than just eating the cheese straight.  The texture is amazing; the taste, divine.  If halloumi had been the manna dropped for the Israelites after they left Egypt, they’d never have left the desert.

And that leads me to a question I’ve always had, but never had answered to my satisfaction.  We’re all more or less familiar with the concept of a miracle, even though one can stretch its meaning around a bit.  But let’s take as a basis the definition that a miracle is a divine action in the mortal realm, a supernatural act of God.  Good enough?  Okay, here’s the question: what is the antonym of the word “miracle?”  The results from an online thesaurus weren’t really satisfying; they expressed either an absence of miracles, or else simple bad luck.  Neither of those is quite what I’m after.  In other words, if God performs miracles, what does the devil perform?  (Sorry, “atonal symphonies” is two words.)

Kat and I have just returned from Morimoto, where we had one of the most amazing meals of our entire lives.  Although we’d been seated at a table to start, Kat decided (and rightly so) that we should move to the sushi bar. 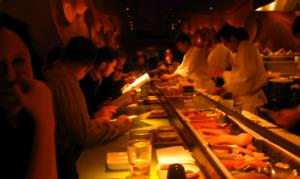 So with a little help from the hostess, we moved to sit at the end of the bar, just a few feet from Morimoto himself, and after a bit of debate we decided to start out with the seared kobe beef and green tea soba noodles.  These were by themselves amazing, but they were just the beginning.  From there, we moved into the omakase, or chef’s tasting menu.  The best part of this was that we were seated right in front of the chef who was creating our meal, a sushi chef by the name of Alex, so we could ask questions and make requests while he prepared our courses.  And what did we have?

It’s difficult to even imagine being able to come up with the words to describe how good everything was. 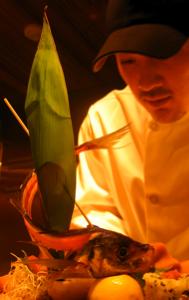 Take the scallop, for example.  Alex scraped the meat off of a shell, then sliced it in half and bent over to closely inspect the two halves.  We couldn’t figure out what he was doing as he switched his gaze from one to the other, then back.  After a few moments he beckoned us close and said, “Look at this one.  See around the edges?”

We looked.  In the light, the edge was puckering and moving slowly.

“It’s still alive,” he said happily.  And then he sliced the meat into chunks, seared it on the sushi grill, and served it up with spicy extra-virgin olive oil and cherry tomato halves.

Even though I hate scallop to the extent that it makes me feel ill, I somehow just had to try a piece.  It was actually rather tasty, although I did keep it to that single piece.

The whole time, Alex graciously answered our every question of “Ooo! What’s that?” and “How is that made?” and “How do you get a meal prepared by Morimoto himself?”  He didn’t even take that last question personally; I’m sure he gets it all the time.  From our perch we got to watch Morimoto make mini-sushi, which we’re told is all the rage now in Japan.  Each little piece was maybe a centimeter long.  Not only did we think they were too cute for words, so did most of the staff.  We saw one waitress run after the server calling, “Wait, let me see, let me see!”

It was, in every sense, an incredible experience.  If we ever do make it back to Morimoto, we’ll not only try the omakase again, but we’ll ask to sit at Alex’s station on the sushi bar.