Apparently my recent posts have lead some people to think that it’s time to resurrect my former title of Mr. Bitter, so the following two items come just in time.

So don’t worry: the world is too amusingly surreal for me to stay permanently bitter.  I get outraged sometimes, but that’s because I want the world I inhabit to improve, not deteriorate—and I want it now more than ever.

Despite being a techogeek of the second order, I’ve long been opposed to the Strategic Defense Initiative.  It never made sense to me that a few satellites, or even a few hundred, could protect the country from a missile attack by the Soviet Union.  Suppose the SDI system managed to survive an opening-round EMP pulse (which is highly unlikely) and had to defend against a first strike of 5,000 ICBMs and 30,000 decoys.  Now suppose that the SDI system somehow managed to shoot down 99.5% of the incoming vehicles, warheads and decoys alike.  In that case, 25 missiles would make it through, not to mention 150 decoys, all of which will do at least some kinetic damage when they land.  Oops.

Even today, SDI makes little to no sense no matter what you call it.  If a “rogue state” obtains a nuclear weapon and wants to hit us with it, they’re going to smuggle it into (or even just really close to) America and then set it off.  Why leave a very obvious ballistic trace on NORAD’s radars when you can fly/sail/drive/walk the device up to your target?  The only real purpose to SDI seems to be propping up a few aerospace companies, and maybe making the Chinese more tense.

Now we have one more reason to avoid putting weapons in orbit: post-battle debris.  If you blow up stuff in orbit, it doesn’t just vaporize like in Star Wars—all the shrapnel has to go somewhere.  Like into orbit around the Earth.  We’d get pretty meteor showers for a while, but is that really worth taking down the entire global communications and positioning infrastructure, not to mention imprisoning ourselves on this increasingly stupid planet for several centuries?

What I find really depressing is that it’s probably too late: the technology is available today, assuming you’re satisfied with putting up comparatively crude weapons.  If it hasn’t been done already, it will be done by somebody within the next 50 years or less.  Then everyone else will have to follow suit.

And just to top off a bad situation with a pitch-black cherry: the Orbital Debris Program Office, which is the agency that keeps track of the small-scale junk we’ve already put in orbit, is due to be shut down this year for lack of funding.  Now there’s a good idea.  Hey, why not shut down the air traffic control system while we’re at it?  I’m sure nothing could possibly go wrong with that plan, either.

I’m beginning to see how Earth eventually becomes the Planet of the Apes.  I just wish the apes weren’t already running the show.

My God, has nothing been learned?

Hooray!  It’s Income Tax Day in the United States, which means that carping and whining about our tax burden will be at an annual high.  Boy oh boy, what could be more fun?  How about griping about a closely related topic?  I’m here for ya!

Personally, I don’t get most of my fellow Americans.  Compared to most countries in the industrialized world, we have a fairly small tax burden, while still expecting basically the same level of service from our government.  In addition, our gasoline is incredibly (some would say criminally) inexpensive compared to most countries.  Our income tax averages around 30% of direct income, with some shifting on either end of the wealth/poverty scale.  I can’t speak to capital gains taxes, but my general thinking has always been that if you’re well-off enough to have capital gains at all, then you can darned well afford the taxes on them.  Ditto the inheritance tax, only more so.

If we want government services, then taxes are inevitable.  If we don’t want those services, then enough people need to elect enough representatives to cut the unwanted services.  Then the taxes can drop.  (Assuming the debt’s been paid off, which of course it won’t be any time soon, but that’s an entirely different gripe of mine.)  If there aren’t enough such representatives, then the “will of the people” must be to keep the services.  Ergo, the taxes need to be able to support the expenditures on those services.  It all seems kinda simple to me.

And hey, if you don’t like the value received for the money you’re required to pay, then nobody’s forcing you to live here.  Find a better country.  Ever think you’d hear a liberal say that?

This just in: a large area of nightfall was spotted over west central Lake Erie late this morning, reducing visibility and confusing the heck out of everyone in the area.  Doppler radar registered the following at 10:52am local time: 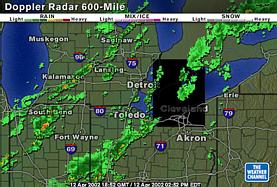 By early afternoon, the unexpectedly large area of nightfall had developed into a line of thunderstorms that moved slowly out of the area.

In a development that surprised nobody, Youngstown area Representative James A. Traficant phoned in from the planet Mars to blame the entire situation on vindictive federal prosecutors out to get him and anyone near him.  The U.S. Department of Vindictive Prosecutions could not be reached for immediate comment.

Revenge of The 508 Follies: So the U.S. government’s Section 508 Web site has removed its “best viewed with” line that caused me such angst last week, which I suppose is a positive step.  Unfortunately, they have yet to fix either their HTML or CSS to be valid.  I’d rather they had fixed the code and left the annoying text… but I suppose I should be grateful that some improvement has occurred.

The 508 Follies, Take Two: I got e-mail yesterday morning from a U.S. government Web developer who was reacting to Tuesday’s semi-rant.  In addition to expressing embarrassment over the state of the Section 508 Web site, he pointed me toward an article on Government Computer News—a site I hadn’t known even existed, but plan to visit from now on—titled “Section 508 site takes own advice.”  (That constitutes 100% of your recommended daily allowance of irony, by the way.)  As my correspondent said about the article: “Apparently they recently redesigned their site and the old one was actually worse.”

For some reason I’m put in mind of the song “Don’t Worry About the Government”:

For those of you in the civil services who are still working hard and trying to be strong, which I suspect is a lot harder these days, a tip of my hat and most heartfelt thanks to you.

I waited a day on posting this, just to make sure nobody thought it was an April Fools’ joke.  Go to http://www.section508.gov/, which is the central hub for information on the piece of U.S. Federal law that mandates accessibility in all Web sites of government agencies, and of those businesses and organizations that do business with or receive money from the U.S. government.  Look at the bottom of the document: “This site best viewed with MS Internet Explorer 5+”.

So I ran the site through the W3C’s markup validator, and got back a report that their markup is broken.  Go figure.  Neither does their CSS validate, and I’m not just talking about the metric ton of warnings the page generates.  No wonder their site looks best in IE5 (for Windows, I assume): odds are it’s the only widely available browser sloppy enough to tolerate their slipshod authoring practices.

It’s things like this that really sap my faith in the intelligence of my fellow man.  Well, that and the e-mail response I saw from the maintainers of the site, which basically said, “IE is the biggest gorilla on the Web so the other 10% of our users can sod off.  And so can you.”  I expect that kind of thing from 14-year-old fanboy site authors, not the people in charge of the government Web site about how Web sites are supposed to be open and accessible to all users.

I’m going to say it right here and now: “this site best viewed in browser X” is shorthand for “this site’s maintainers are too lazy to think about standards compliance, user experience, or cross-browser design.”  Before I get all kinds of “pot, meet kettle” e-mail regarding meyerweb and how it’s designed, you’ll note that I never claimed the site would look better in one browser or another.  If anything, this site looks best in a browser that supports W3C standards.  And I have nothing against their font-sizing widget; I use one myself.  What bothers me is that they can’t be bothered to take simple steps towards the very principles their site espouses, and the browser favoritism they show as a result.

“This site best viewed with MS Internet Explorer 5+”… cripes.  Some days I wonder why we even bother.